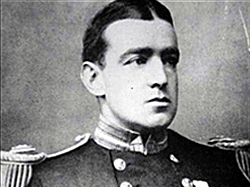 Sir Ernest Shackleton is widely known as one of the most inspirational leaders of the twentieth century. Whilst he never achieved his personal dream of being the first to reach the South Pole, his reputation as a leader of men is based on a still greater success: the survival and safe return of all of his team members, whilst overcoming almost unimaginable odds. Shackleton’s name lives on as a synonym for courage, bravery and most of all, leadership.

Sir Ernest Henry Shackleton was a key figure in the Heroic Age of Antarctic Exploration alongside Roald Amundsen and Robert Falcon Scott, all of whom are famed for their courageous exploits that captured the public imagination.

He was born to Anglo-Irish parents on 15 February 1874 in County Kildare, Ireland. He was the second of ten children and his father was a doctor. In 1884, the family moved from Ireland to Sydenham, London where Shackleton was educated at Dulwich College. The young Shackleton did not distinguish himself as a scholar and was said to have been ‘bored’ by his studies. Rejecting his father’s wish that he become a doctor, he joined the merchant navy when he was 16 and qualified as a master mariner in 1898. This enabled him to travel widely and he developed a keen interest in exploring the poles.

In 1901, Shackleton was chosen to go on the Antarctic expedition led by British naval officer Robert Falcon Scott on the ship RRS Discovery. The team spent two summers in Antarctica, and Shackleton joined Scott and one other, in an attempt on the South Pole in 1902. They trekked towards the Pole in very difficult conditions, marching up to 40k a day, with food in short supply.  On 31 December 1902 they reached as far south as 82° 17′, getting closer to the Pole than anyone had before; but they were forced to turn back because of terrain, severe conditions, and the onset of scurvy. Shackleton also suffered from heart and lung ailments and was later sent home by Scott, a factor thought to have led to a private rivalry that continued throughout their lives.

Back in Britain, Shackleton spent some time as a journalist and was then elected secretary of the Scottish Royal Geographical Society. In 1904, he married Emily Dorman, with whom he shared a love of literature, particularly Robert Browning. They had three children, the youngest of whom, Edward, became the first westerner to climb Mount Mulu in Borneo. In 1906, while organising and raising funds for another Antarctic expedition, Shackleton unsuccessfully stood for parliament in Dundee.

On 1st January 1908, having successfully secured the funding needed for his next expedition, Shackleton set sail for the Antarctic once more, this time as the leader of his own expedition, Nimrod. The trips goal was to land at the Discovery site, leaving a party of men who would then proceed to the South Pole. However, upon arrival the crew found that the Discovery’s base camp was inaccessible, and they were forced to set up camp 40 kilometres north of the planned site.

Despite getting within only 180 kilometres of the Pole, the crew were unable to reach their ultimate goal, after team-member Frank Wild was almost killed when a pony fell into a crevasse, injuring him and depriving the party of rations. Indeed, they were desperate for food, and Shackleton decided that it would be impossible for the entire team to return alive if they continued. However, the expedition was not without it’s successes, including reaching further south than anyone before, the first ascent of Mount Erebus; a trek to the approximate location of the Magnetic South Pole; the discovery of the Beardmore Glacier passage; the first crossing of the Trans-Antarctic mountain range and it the first expedition to set foot on the South Polar Plateau.

It was also during this trip that Shackleton acquired his nickname, ‘the Boss’, due to his leadership abilities, which focused on camaraderie and admiration. Throughout the return march, the party subsisted on half-rations, and at one point Shackleton gave his only biscuit for the day to Frank Wild. The group returned to base camp on 28 February 1909 to discover that Nimrod had sailed two days earlier. In response, the men burnt the camp to attract the departing ship’s attention. The ploy succeeded, and by 1 a.m. on 4 March 1909, the whole party boarded for home. Shackleton returned to the United Kingdom as a hero and was knighted. Soon after, he published a book about Nimrod’s expedition titled The Heart of the Antarctic. Regarding the failure to reach the South Pole, Shackleton remarked to his wife: “Better a live donkey than a dead lion.”

In 1911, Norwegian explorer Roald Amundsen reached the South Pole, followed by Scott who died on the return journey. But interest in the Antarctic continued and Shackleton set up another Antarctic mission: the Imperial Trans-Antarctic Expedition, a cross-continent trek that came to be known as the Endurance mission. Endurance departed on 8th August 1914, just a few days after the First World War began. By January 1915 it had already become trapped in the Antarctic ice, where it remained for ten months. The crew had hoped that warmer spring weather would eventually free the vessel from the ice, but instead, when spring arrived the breaking of the ice splintered the ships hull. The men were forced to abandon their ship, and spent the next six months camping on an ice floe, hoping that it would drift in the right direction.

To supplement their diet the men ate penguins and seals found in the area. This ceased when the local animals migrated north for the winter; food became scarce, and the men resorted to eating their dogs. On April 9th their ice floe broke in two and Shackleton decided that the crew should enter their three small lifeboats and head for land. After seven days at sea in the three small lifeboats, the men eventually reached Elephant Island. Elephant Island was an inhospitable place far from any shipping routes, so it was essential that help must be sought from South Georgia. For his trip, Shackleton chose five men to cross the 1300 kilometres of Open Ocean in the lifeboat the James Caird. These waters are among the most dangerous in the world, and as captain, Frank Worsley reported, waves of 16 metres were not uncommon.

Shackleton had refused to pack supplies for more than four weeks, knowing that if they did not reach land by that time the boat would be lost. After 16 days of sailing, the men reached South Georgia, before Shackleton and two others set out across the island to reach help. They travelled for 36 hours across mountainous terrain, making them the first people to successfully cross South Georgia. On 30th August, Shackleton was able to rescue all 22 of his men from Elephant Island, after they had been stranded for 105 days.

Shackleton returned from the Endurance expedition in the midst of the First World War and despite suffering from a heart condition and being too old to be conscripted, he volunteered for the army. Although he never directly fought on the front, he had a variety of postings, from Buenos Aires to Murmansk. After the signing of the Armistice, he returned home to publish ‘South’, his account of the Endurance expedition.

Despite the events of the Endurance expedition, in 1921, Shackleton set out again for the Antarctic aboard Quest on the Shackleton-Rowett Expedition, with the intention of circumnavigating Antarctica by sea. By the time the party had reached Rio de Janeiro, Shackleton had fallen ill, but he refused to return the ship to England or seek treatment, and Quest continued south.

On 5 January 1922, while the ship was off the coast of South Georgia, the expedition’s physician, Alexander Macklin, was called to Shackleton’s cabin and noticed that he was ill. Macklin suggested to Shackleton that he “take things easier in the future”, to which the reply was: “You are always wanting me to give up something, what do you want me to give up now?” These were the last words spoken by Sir Ernest Shackleton. A few moments later he suffered a fatal heart attack. He was 47. At the request of his wife, Shackleton was buried in Grytviken, South Georgia. His death is considered as marking the end of the Heroic Age of Antarctic Exploration.

Although Shackleton was not immediately recognised for his achievements after the Endurance expedition, in later years his exploits have been the focus of many books, films, television shows and memorials. He is commemorated with a statue outside the headquarters of the Royal Geographical Society in Kensington, London and in May 1998 the Shackleton Memorial Library opened at the Scott Polar Research Institute at the University of Cambridge. In 2002, in a BBC poll conducted to determine the ‘100 Greatest Britons’, Shackleton was ranked eleventh. While he never achieved his personal dream of being the first to reach the South Pole, his reputation as a leader of men is based on a still greater success: the survival and safe return of all of his team members, often overcoming almost unimaginable odds.