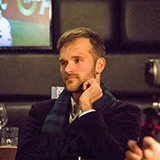 Jasper Kain founded Football Beyond Borders with a group of friends at the University of London.  Having played for Chelsea and Gillingham youth, he had aspirations like so many other teenagers of becoming a professional footballer.  He was released at the age of 16 but five years later decided to set up the organisation to harness the educational power of the game to transform the lives of young people.

Having previously worked as a film maker and community organiser, he decided to combine his talents and set up FBB Schools programme which works with students in years 5-9 from economically deprived backgrounds who are underachieving, disengaged and misbehaving in the classroom but have a passion for football.  It harnesses the power of the game through a tailored football based literacy curriculum to engage and inspire students, and supports them to improve their attendance, behaviour in class, attitude to learning and aspirations for the future.

An initial pilot project at a school in South London had some notable successes in its first year, with attendance going up from 86% to 95%, an 82% drop in the number of participants on school report and 100% of participants stating that they felt more confident about their futures.  This was reflected in him being shortlisted for the Daily Mirror’s Pride of Britain Awards in 2015.

The Shackleton Leadership Award will enable him to roll the programme out to more schools in London, develop a team to assist with the delivery of the sessions and enhance the football based learning curriculum to ensure a lasting impact.

Reply on TwitterRetweet on Twitter2Like on Twitter1Twitter
Load More...