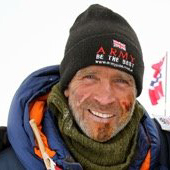 Henry and I have known each other since 1970 and so it is with deep personal sadness that I must announce his death (Sunday 24 January).

Henry was 71 days into a 1150 mile bid to become the first person to cross Antarctica completely unsupported and unassisted. Setting off in November and having passed the South Pole on 3 January Henry was just a few miles from the finish when he had to call off the expedition on Friday.

Henry was airlifted to hospital in Punta Arenas in Chile with suspected peritonitis.

Henry was helping to raise £100,000 for the Endeavour Fund which is managed by the Duke and Duchess of Cambridge’s charity, the Royal Foundation, which helps injured or wounded veterans. Please help him to achieve his target.

Our thoughts are with his wife Joanna and their two children Alicia and Max.