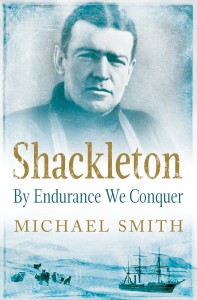 A new biography of Sir Ernest Shackleton has been published: Shackleton – By Endurance We Conquer, by Michael Smith. It has been described as the first comprehensive biography of Shackleton since the 1980s and brings a fresh perspective to a compelling, charismatic and extraordinary man.

Ernest Shackleton is one of history’s great explorers, an extraordinary character who pioneered the path to the South Pole over 100 years ago and became a dominant figure in Antarctic discovery. A charismatic personality, his incredible adventures on four expeditions have captivated generations and inspired a dynamic, modern following in business leadership. None more so than the Endurance mission, where Shackleton’s commanding presence saved the lives of his crew when their ship was crushed by ice and they were turned out on to the savage frozen landscape. But Shackleton was a flawed character whose chaotic private life, marked by romantic affairs, unfulfilled ambitions, overwhelming debts and failed business ventures, contrasted with his celebrity status as a leading explorer.

Drawing on extensive research of original diaries and personal correspondence, Michael Smith’s definitive biography brings a fresh perspective to our understanding of this complex man and the heroic age of polar exploration.