The Endurance set sail from Plymouth 100 years ago today. The following is an excerpt from South, Sir Ernest Shackleton’s account of the Endurance expedition.

“Towards the end of July all was ready, when suddenly the war clouds darkened over Europe. It had been arranged for the Endurance to proceed to Cowes, to be inspected by His Majesty on the Monday of Cowes week. But on Friday I received a message to say that the King would not be able to go to Cowes. My readers will remember how suddenly came the menace of war. Naturally both my comrades and I were greatly exercised as to the probable outcome of the danger threatening the peace of the world. We sailed from London on Friday, August 1, 1914, and anchored off Southend all Saturday. On Sunday afternoon I took the ship off Margate, growing hourly more anxious as the ever-increasing rumours spread; and on Monday morning I went ashore and read in the morning paper the order for general mobilization. 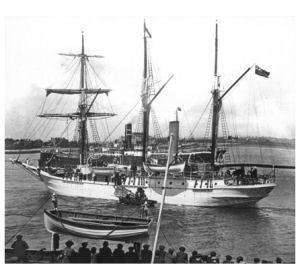 I immediately went on board and mustered all hands and told them that I proposed to send a telegram to the Admiralty offering the ships, stored, and, if they agreed, our own services to the country in the event of war breaking out. All hands immediately agreed, and I sent off a telegram in which everything was placed at disposal of the Admiralty. We only asked that, in the event of the declaration of the war, the Expedition might be considered as a single unit, so as to preserve its homogeneity. There were enough trained and experiences men amongst us to man a destroyer. Within an hour I received a laconic wire from the Admiralty saying “Proceed.” Within two hours a longer wire came from Mr. Winston Churchill, in which we were thanked for our offer, and saying that the authorities desired that the Expedition, which had the full sanction and support of the Scientific and Geographical Societies, should go on.

So, according to these definite instructions, the Endurance sailed to Plymouth. On Tuesday the King sent for me and handed me the Union Jack to carry on the Expedition. That night, at midnight, the war broke out. On the following Saturday, August 8, the Endurance sailed from Plymouth, obeying the direct orders of the Admiralty.”

If you're a female / non-binary person working in education, join our fortnightly virtual coffee series by emailing hello@beherlead.com to register📨

Join an amazing team & help change lives - just a few of the benefits of working at Well Grounded! ☕ ❤️ We are looking for an experienced Marketing & Partnerships Executive to join our our dynamic team. More information here: https://t.co/i0Iwu6qT9L