When I designed and rolled out a capstone course on leadership in the NYU Stern MBA program, I made sure I included a case on Ernest Shackleton. Several years later, I still use his story as the first of several biographical case studies on great leadership in my course.

Great leaders, I learnt from my research, follow the parameters of what I call the Triple “E” Kabi Leadership Paradigm: they envision; they energize; and they execute.

I notice that the triple parameters that make up the act of leadership are precisely and simultaneously calibrated in the case of more effective leaders.  Shackleton is a fine example of the three leadership parameters working together in balletic precision. He knew, after Browning, that a man’s reach should exceed his grasp. This explains the audacity of his initial vision to conquer the Antarctic. He also knew, after Napoleon, that an army marches on its stomach. That’s why he chose to retreat as he wrote in his journal: Death lay ahead. Food lay behind. That’s a true hallmark of great leaders. They push their followers but not beyond the point of no return. They don’t confuse leadership with martyrdom. They understand that leadership is a not a person but a phenomenon wherein the leader and the followers discover their mutual dependence and shape their collective fate. They understand the symbiosis. 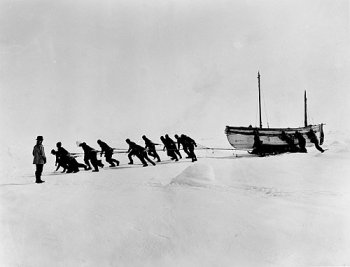 Shackleton, like all great leaders, was so tuned not just to his internal environment of machine, men and their many moods but also to the external environment of the fickle and ferocious Antarctic. And he adapted his vision to align with those forces.  That’s why he changed his original vision of reaching Antarctic ahead first to one of traversing it first, and still later, to one of surviving the ordeal and returning home with not a life lost. Yes, there is a fourth E. Great leaders know when to exit!

I see Shackleton audacious enough to dare, tenacious enough to persist, but realistic enough to adapt. He tweaks his vision to align with what is possible. His story is one of heroic failure rather than plebian success. The very sweep and scope of the failure makes his story a stirring tale of leadership.

Shackleton’s story is a great lesson on how to envision, energize, and execute, and when to exit and realign the vision. The story is a hundred years old, but its wisdom, fresh as the day.